The first image from NASA’s new James Webb Space Telescope made me think of Bob Dylan. More precisely, it made me think of the lyrics to his song, “Every Grain of Sand,” which is like a prayer sung by a nail file. And then I thought of Psalm 147: “Who heals the broken hearted and binds up their wounds. God numbers the stars and calls each one by name.”

The implication of thousands of galaxies in that speck of the cosmos taken by a telescope suspended one million miles from earth still has me reeling. Like Dylan rasps, “I am hanging in the balance of a perfect finished plan, like every sparrow falling, like every grain of sand.” 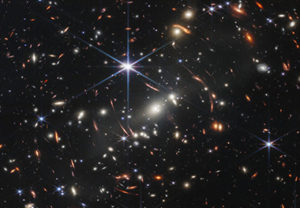 Like the psalm, it is a song that speaks to the work we dedicate ourselves to at Jewish Family Service. We strive never to see a mass of nameless and faceless people struggling across the Puget Sound; we aim to see the person before us and give honor to their struggles and aspirations—to let them know they are not alone. We celebrate their successes and mourn their losses. We call them by their names.

We are all woven together. I have a memory of a short film from grade school. It opens with a person lying in a field and increasingly zooms out further and further past the field, past the country, the Earth, our Milky Way and outward to the furthest edges of the imaginable universe. The projector rattled on. The film then zoomed in closer and closer into the arm of the person lying in the field, through their skin and past the cellular level.

One of the most elemental aspects of the Jewish tradition is the recognition of the deep interconnectedness of things; the smallness and expansiveness of being. It seems as a species we humans are forgetting just how interconnected and symbiotic our relationships are—not just with our fellow humans, but the natural world as well.

I read recently that fifty percent of the DNA in our bodies is not our own. It belongs to the chorus of bacteria that not only keeps us company but keeps us alive. Nature’s casual complexity and riotous harmony have no end. And like it or not, we humans are part of that grand mosaic.

A few months ago, I was scuba diving in the Pacific Ocean enrapt by a sea turtle, when in between breaths, I became aware of an otherworldly song emanating from the deep. Whales were calling. It seems the entire universe is talking, but are we listening? Fungus helps trees communicate with each other through their root systems. They also share water and nutrients with their siblings stuck in shadow. I wonder if there is a master class taught by dirt.

We need to expand our definition of language beyond blunt force tweets. Eighty percent of human communication is non-verbal. Think about that next time you want to say to someone you love them. Appreciating the profound simplicity on the far side of complexity takes effort and a deeper kind of awareness. It takes time.

One of the many things that makes humans unique is our desire to look deep into the beginning of space and time. To “number each star and call each one by name,” while simultaneously “sitting with the broken hearted and binding up their wounds.”

A word for prayer in Hebrew is “avodah.” It can also be translated as “work” or “service.” One of the things I respect deeply about the community of people who work at JFS is the depth of their commitment to the people we serve. We put relationships at the center of our work at JFS by starting with the question, “How can I best be of service to this person in this moment?”

Keeping relationships at the center means slowing down enough to hear stories and seeking to understand a person’s lived experience. History speaks in the present tense, not the past. But lately it seems there are more people in need than there are stars in the sky. And yet, like the story of the boy throwing starfish back into the ocean, we do the “work.” The “service.” The “prayer.” We don’t quit on them. We believe in them. One person at a time.

“How can I be of service and be more present?” is a good question for all of us to ask. How can we not only listen but strive to hear and expand our ideas of language. To transform our life’s work, our lives, into a form of prayer. To tune into our eighty percent non-verbal communication. To hear the humming of the spheres. To be willing to see in the universe a grain of sand. To encounter in the person before us, the face of God.

Over two thousand years ago, the psalmist was aware that despite the infinite nature of the universe we are not insignificant as we float on our tiny moat of celestial dust. As we transcend to the universal, we should never forget the infinite significance of the individual, the particular, the one. You. Us. We.