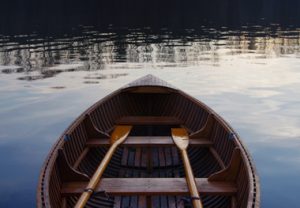 A midrash tells about a group of people in a boat. One begins to drill a hole in the floor under his seat. Incredulous, the group demands to know, “What are you doing?” The one replies, “It’s in my space, why do you care?” The group cries back, “We are all in the same boat you fool. You will sink us all.”

We would do well to heed those words today. The Jewish tradition has never been about an individual seeking a relationship with the Divine — we have always been a community seeking that relationship. It is in that spirit that during this time of year we stand as a community asking for forgiveness. We speak not just as individuals but as a community. It is through our collective voice we acknowledge we are all responsible for each other. And, we are given the opportunity to find a sense of shared peace.

The idea of collective impact and responsibility was something my father taught me about. He would occasionally reflect on the positive influence mandatory military service had on our society. Despite its untold horrors, in his experience, our nation found a unity of purpose through World War II. Individuals put themselves in service of values and efforts that extended beyond the boundaries of self, family or community. It was that spirit that continued throughout his generation. It was a belief that as individuals, and as a nation, we were part of something greater.

Whether myth or reality, I grew up being taught that, like it or not, we are all in the same boat — and, rather than drilling holes under our seats, we need to learn to row in the same direction, toward the same horizon. A great commanding voice echoes over that horizon. A voice calling us forward to a world that balances justice with compassion — rights with responsibilities. A world shaped by our collective aspirations and highest ideals. A community, not divided, but unified through a generosity of spirit toward each other.

I feel glimpses of the world over the horizon in our community’s shared commitment to the work of JFS. I feel that sense of common cause my father described. I see people from all walks of life coming together, dedicated to the hard work of rowing in a single direction. I see us afloat, even as we encounter rough waters and stormy skies. We find our ballast and strength as each of us does what we can to live with the compassion that makes us human and the responsibilities that make us citizens.