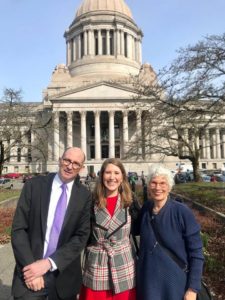 Preventing evictions, removing barriers to vital assistance and providing funding for naturalization services were the focus at JFS Advocacy Day in Olympia on March 14, 2019. Each year, JFS staff and volunteers advocate for important issues and policies that impact our work and communities.

JFS serves a wide range of individuals and families, including domestic violence survivors, people with disabilities, older adults and refugees. With such diverse populations living throughout the Puget Sound region, there is a significant amount of legislation, at all levels of government, that can have a major impact on our community.

The JFS legislative agenda for Olympia was decided through a collaboration between the JFS Government Affairs Committee (GAC) and program staff.

Now, we are asking you to stand with us and advocate. Please contact your Washington state legislators to let them know you want their support on the following issues or thank them for their support.

Passed the Senate and is now in the House, where there was a public hearing in the House Committee on Civil Rights & Judiciary on Tuesday, March 19, 2019. The same committee will have an executive session about the bill Thursday, March 28.

This bill would allow tenants more time to pay rent before the eviction process begins, providing a 14-day notice instead of the current 3 days. Conversely, home owners have 90 days before a default notice can be served. Senate Bill 5600 would also require notice be provided in plain language. In addition, tenants would receive earlier notice about any change in rent — a 60-days’ notice instead of only 30. And, this bill provides judges with the discretion to provide temporary relief from eviction for tenants with special circumstances, such as a medical emergency, as appropriate.

Eviction is the leading cause of homelessness in King County. This bill would help reduce homelessness, protect tenants from discrimination, and better protect women and people of color.

Passed the House and is now in the Senate, where it has been referred to the Senate Ways & Means Committee. It will need to be scheduled for a public hearing in order to move forward.

WorkFirst / TANF is designed to protect families with low-incomes from the harm of deep poverty and support them toward stability. During the recession, lawmakers implemented restrictions that exacerbate extreme hardship, leading to diminished support for families experiencing homelessness and facing mental health concerns.

This bill gives families four months — instead of the current two — to become compliant with the program requirements before being sanctioned. Families often need more time to meet these requirements when they are facing homelessness, mental health concerns and/or domestic violence. This bill would also eliminate families from being fully cut off from assistance while being sanctioned and only reduce their cash grant by 40 percent. In addition, the bill would allow more families to apply for a WorkFirst extension. The current limit is 60 months.

Today, there are children and families who are experiencing homelessness and cannot access WorkFirst, a program designed specifically to protect families from deep poverty. WorkFirst is failing these families across the state. Reforming the harshest restrictions on WorkFirst will restore access to this program for many families experiencing deep poverty. Our community members need this critical bridge of support to work toward stability.

Funding for the Naturalization Services Program
Increase funding by $1 million a year in the state budget.

The Senate is working on its versions of the budget. The House released its budget Monday, March 25, and it includes this increase. Governor Inslee suggested this same increase in his version of the budget, released in December 2018.

The Naturalization Services Program is currently funded at $1.657 million per year and has been funded at this level for more than a decade. On top of this, there is a greater demand for services because of the increasing complexity of federal immigration policies. Despite the growing need, it is estimated that the Naturalization Services Program will serve fewer people because of limited capacity. A $1 million a year increase could pay to assist about 1,800 more immigrants to become naturalized each year.

Naturalization has significant social, economic and civic benefits for individuals and families, as well as for cities and states. Naturalization helps Washington state reduced costs, because people can access federally funded programs as U.S. citizens. But, only 20 percent of the nearly nine million people in the U.S. who are eligible to naturalize actually apply for citizenship.

← A Response to New Zealand: We Should Not Accept These Horrid Deeds as “Normal”
A Partnership That Supports College Students →