My brother lives in my childhood home along with my memories . I was back in Minnesota a couple weeks ago staying in my old room. The train still shakes the house when it passes on the small rise in the backyard. The sapling we planted when I was a child now shades the entire yard. Our old neighbors have long since gone from their cookie-cutter houses but walking down the street I see them in my mind — a humid summer afternoon working on their cars, drinking beer on lawn chairs listening to the game, shouting for or at someone.

Where my parents were children of Eastern European immigrants, most of our neighbors were immigrants from the farm country surrounding the city. As our lives converged on our little block, well-worn antisemitic roads were occasionally retraveled across a fence or at the bus stop.

As a young boy, I was unaware I was living in the umbra of the Holocaust, so the antisemitic comments led to me questioning my parents. As was common at that time, they replied with ellipses rather than periods. I was raised in the first generation after Jews were allowed to move out of the inner city, but not necessarily welcomed with brownies and dinner invitations in their new neighborhoods. At least once, the friction with a neighbor led to combustible threats and the police arrived. A cold peace would follow with the hard chill of a January night.

It is striking how many people have their own stories of being intentionally made to feel “othered” when they were just trying to fit in. Racial slurs on the playground at a new school. Encountering at first with confusion and then with resignation the scowls, sneers and implied or overt threats when walking down the street. Knowing that even to dance with your partner at a wedding is seen as an act of protest and not just an act of love and affection — the “men don’t dance with each other” looks of condemnation. 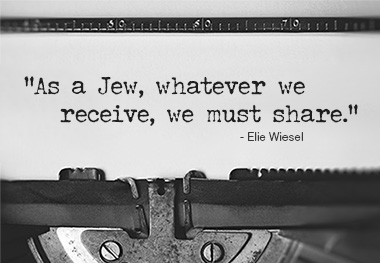 I remember multiple times in different cities being cautioned not to wear my kippah while in public. Of course, not all of us can hide our identities when we don’t feel safe. But for all for whom the undercurrent of threat lurks just below the surface there is an unseen emotional and physical toll when we must cover, erase, and deny who we are to survive or just make it through the day. The model minority, the bigger smile and extra friendliness…personally, I can’t even remember how many times I was told to “keep my head down and not say anything.” Or, “It was just a joke…they weren’t serious.” “You just don’t understand.” Or, “Why are you so sensitive?”

My children are being raised in a world so foreign from my upbringing, but the undercurrents are still there. I do wonder if I am succeeding in passing along the better part of those working-class Midwestern values while sparing them unnecessary burdens. I also hope over time they find courage and meaning, not trauma and anxiety, in the stories I do share. Maybe the anxiety is inevitable.

We humans are storytelling creatures, and the Jewish tradition is built on passing along our collective memories. But what is as important as the stories themselves are the hard learned values encoded in those stories. We make meaning and organize our lives by the stories we tell and the way we tell them. We are shaped by how we interpret our past and our memories of it. We influence our children by the stories we choose to share and the meaning and emphasis we give them. This is true for us as individuals, as families, and as a country.

Beyond how we tell our stories over time we are changed by the telling as well. Stories become a taproot that draws from the deep well of personal and collective memory to shape how we experience our world. Who is a friend and who is a threat? Where do we belong and where are we outsiders?

It is only now, long after my parents’ deaths, I realize there may have been a reason they repeated the same story so many times over the years. They weren’t forgetful, they were trying to tell me about an experience that helped define them. I wish I had asked them to tell me more.

As a people, culture, and religion Jews and Judaism ritualize the telling of our stories for a reason. As a country we do this as well. Our future is guided by how we engage and understand our collective memories. And to understand how these memories become the narratives we share, we must ask ourselves: who is allowed to do the telling? What do we choose to remember and who do we leave out as we pass them along from generation to generation?

The Jewish tradition is raw in its storytelling. Our ancestors are shown in their full humanity with all their flaws and frailties — blunders and failures as well as successes and self-sacrifice.  That has been true for the ragged edges of the whole of our community for thousands of years. As a country we could learn from this. We are not a perfect union and never have been. We have made mistakes and continue to make them. And we need to own those mistakes, learn from them, integrate them and talk about them ‘in our homes and as we walk along the way.’

If we do this with honesty, we might transform our individual and collective trauma into strength, sorrow into meaning, shame into redemption. But we must be honest. We need to learn to look history in the eye, not through our blind spots. We can’t pretend things that happened, didn’t happen, and things that didn’t, did. It can be uncomfortable to hold these truths. They aren’t always self-evident. But it is only through owning our wholeness and brokenness as individuals, families and a country that we can begin to build a stronger union.

The Mezuzah, affixed to the doorposts of our homes, holds the words of the Shema, which says we are commanded “…to teach these words to our children…. talk about them.” What if we all felt that command? We deprive future generations of their legacy if we do not let our ancestors speak through us by the keeping of and passing along our collective stories. We deprive ourselves and our community by not interpreting them, making meaning from them, and retelling them.

Without our stories we detach our values from the very thing that animates them. They become disembodied. And those very stories and the values they carry within them are what has sustained us as a Jewish people for millennia. It is my hope they will guide my children and by my writing this, it will inspire you to share yours as well.

In the end we are messengers from generations past to generations in the future. Without our stories what is left?