Our oldest son, Nativ, left for college last weekend. The house is quieter, somehow a bit bigger now. As a friend once shared, “The nights are long, but the years are short.” I feel that acutely today.

I remember the day Nativ was born. The first words I said to him in this world were the priestly blessing, the same blessing we say to our kids every Friday night. I remember the sound of him struggling to breathe – like a car not able to start. He was whisked away to the NICU leaving us alone to wait in confusion and fear.

The next time we saw Nativ, he was intubated with wires, tubes, and a little purple stuffed animal. It may have been a hippo… we still have it somewhere. He looked like fragility incarnate. Fragility with a tuft of dark brown hair.

At that time, his mother was a pediatric flight physician at UCLA, the hospital where Nativ was born. One of her colleagues, who ran the NICU, offered to stay outside the delivery room, just in case. His name was Dr. Devaskar and he probably saved Nativ’s life.

Thank God Nativ recovered quickly. Most of the other newborns, sadly, did not recover quickly, if they recovered at all. We saw their parents spectrally coming and going, while the nurses and doctors—like divine messengers—showed tremendous compassion. I wonder where all those kids are today. For a moment their lives intersected and then went on their divergent paths. 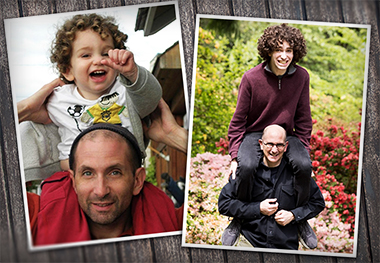 It is hard to believe that today my son is one of the roughly 3 million college freshmen starting this new journey.

Before Nativ left for college, I suggested he write a letter to his future self that he opens when he graduates. Meanwhile, I am writing a letter to his current self – offering a few reflections that may help him on his way.

If you have a young person who recently left your home on a similar journey, I recommend you do the same. It provides an opportunity to slow down, reflect, and give honor to a significant liminal moment in our lives. It is a fitting thing to do during this holiday season of contemplation and accounting.

In the years to come my great hope is that Nativ:

…will learn to clarify his core values and accept his shadow values as well.

…will always test his assumptions and appreciate the world is not black and white but only shades of grey.

…will learn two opposing truths can exist and rest side by side. And he can hold them both and learn to live with the contradiction.

It is why I hope he will get to know people with very different viewpoints, if only to clarify and expand his perspective. Just as people have different values, we hold different truths as well. He can own his truth without denying someone else theirs. And he should expect the same from others.

I want Nativ to believe in himself and follow his dreams. And remember as my father said to me, “In twenty years that grade won’t matter nearly as much as the experiences, conversations, and memories.”

I hope he will be intellectually and emotionally curious. And be vulnerable.

I want him to learn to hone and trust his instincts and use them as a compass pointing to his true north; yet appreciate that life will always be more white water rafting than synchronized swimming. We can’t control the river; we can only control how we respond to it.

I want him to challenge himself and try new things: to take smart risks and some dumb ones as well, but learn from them. As a mentor once said to me, “There is no comfort in the growth zone, and no growth in the comfort zone.” I hope that he will seek out mentors and learn from them.

I want him to understand he can be simultaneously humble and confident, but always lean toward humility with other people’s emotions—to strive for humility.

Also, time, family, and true friendship are the most precious things in life. I hope he always treats them that way.

Equally, I hope he comes to a fuller appreciation for the depth of wisdom within the Jewish tradition and how precious that legacy is. But like most things of value, fully coming to that appreciation takes dedication and effort.

And while the next years are for him, I hope he also finds ways to be of service to the people and community around him.

I suspect this letter may be more for me, but maybe when he is older he will look back on it with bittersweet nostalgia and find something of value to reflect on or share with his children when they leave for college. Maybe he will have a better understanding of my values, how I try to live my life and how foundational tradition is to it all.

Parenting, like so much of life, is one long lesson in letting go. And that is what many of us parents are doing now. Letting go.

And that is as it is meant to be.